Runner’s high can motivate commitment to a daily practice, but years and years of the same old thing might make this intoxicating feeling dwindle. Tuning in to an engaging podcast, listening to workout tunes or people-watching on your route can stave away boredom for only so long. Repetitive daily movements can also cause the body to adapt to its activity level, making it harder to burn the same amount of calories over time. For those looking to refresh their workout, reverse running could be the key to elevating any fitness routine.

The action of running backward, often referred to as “reverse running” or “retro running,” challenges muscles and the cardiovascular system in unique ways. When incorporated into a normal forward-facing run in short intervals, these bursts of reverse movement can improve posture and balance, boost endurance, and better tone the core, calf and quadriceps muscles. A 2016 study conducted by The Journal of Strength Conditioning Research found that backward running burns fat faster than traditional running, increasing heart and lung activation while amping up full-body muscle activity. Female study participants who introduced retro running into their fitness regimen three times per week lost an average of 2.5 percent of their body fat within six weeks. 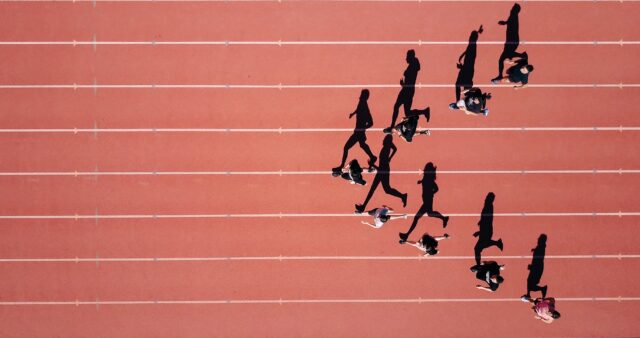 For those monitoring an injury or dealing with chronic pain, reverse running can be a low-impact way to get a daily dose of movement without straining the muscles and joints. By reducing imbalances between anterior and posterior muscles, reverse running deflects pressure away from the knees. Robert K. Stevenson, ND, author of Backwards Running, believes that the practice can be beneficial for athletes of all disciplines. He urges runners to adhere to good form during retro movement by keeping shoulders squared over the feet, holding arms against the side of the body and gazing backward frequently to prevent collisions with objects or people. “I like backward running, because I get to see how far I’ve gone, not how far I’ve got to go,” he says.

Backward running also has strong mental health benefits. Shantelle Gaston-Hird, the U.K.’s fastest reverse runner—she can finish a backward half-marathon in 2 hours, 27 minutes, 9 seconds—loves the mindfulness element of her practice. She claims that retro running feels meditative in nature because her brain is distracted from worry and stress, with her mind focused instead on the position of her feet and legs. Gaston-Hird says, “Initially reverse running was just a bit of fun, but after doing research I realized that it’s a great cross-training exercise, and a great workout for your abs.” For those hesitant to pick up the technique, opt for early morning runs to avoid crowds, or bring along a friend to motivate one another and take turns monitoring your surroundings.