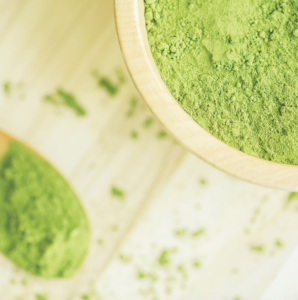 Kale, spinach, watercress—the list of trendy greens that are high in phytonutrients seems to be growing faster than a head of chard on Miracle-Gro. But the one you’ve most likely never heard of may just be the superest of them all: moringa.

Moringa oleifera is a hardy, fast-growing tree native to Asia and Africa, with peppery, baby-spinach-like leaves, which are typically dried and ground into a powder that looks and tastes not unlike matcha. While clinical data is limited, some studies have shown moringa may help fend off everything from high cholesterol to arthritis; diabetes to ulcerative colitis; asthma to anxiety. It may even have the ability to prevent cancer and reverse Alzheimer’s disease. If the medical benefits aren’t yet proven, there’s no denying its nutritional punch: Moringa contains seven times the vitamin C of oranges, four times the vitamin A of carrots, four times the calcium of cow’s milk, and three times the potassium of bananas. Plus, it has twice the protein, four times the iron and two-and-a-half times the fiber of kale. And it boasts anti-inflammatory benefits that outstrip those of turmeric. Add in all nine essential amino acids and 46 antioxidants, and it’s easy to see why the popularity of moringa is on the rise among the smoothie-sipping set.

Lisa Curtis discovered moringa when she was a Peace Corps volunteer living in Niger; upon returning to the States, she crowdfunded the seed money to build a company that would allow women in West Africa to earn a sustainable livelihood by farming moringa and selling a portion of each harvest to consumers here in the U.S. Called Kuli Kuli, the Califonia start-up sells an array of moringa products, including nutrition bars, energy shots and newly launched smoothie mixes, in addition to moringa powder.

“We don’t make any medical claims,” says Curtis, “but we do hear a lot from our customers—everyone from cancer patients going through radiation treatment, who say the antioxidants have been a big help, to diabetics, as it seems to help to regulate blood-sugar levels.” Even those just looking for a quick way to get their greens are fans, and as a complete protein source, it’s particularly beneficial for vegetarians, vegans or anyone preferring a plant-based diet, says Curtis. “No blender or trip to the supermarket required.” kulikulifoods.com