In the autumn I went to university, I declared myself an art history major and thrilled to the menu of classes, especially those about the Middle Ages. Before long, I thought of myself as a serious medievalist and a part-time musical theater actress—a condition I would say is now firmly in reverse order—and one of my professors gave me a special pass to visit the rare-book library, known as the Beinecke library, and see miniaturist paintings in person. This is like being invited to a special laboratory to put your fingers in plutonium, or to a certain observatory to see stars with a rare telescope. And this was where I was shown the oldest known tarocchi, or tarot cards. I had always been fascinated by fortune-telling and occult things, by things and places that have an air of mysticism. But I would not have thought I could do this for a good grade.

They were larger than I expected, made of heavy cardboard and kept in individual envelopes. I learned they were painted by the artist Bonifacio Bembo and were called the “Cary-Yale Visconti deck,” regarded as the oldest tarot cards in existence, one of several hand-painted luxury Italian decks made for the Visconti family in the 15th century. The gender-balanced deck had not only a king and a queen, but a knight and a female knight, and a page and a female page, making scholars suspect the deck was a commission by a female member of court. 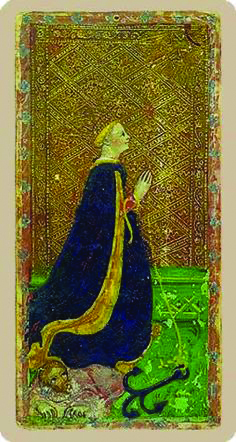 One oddity of the deck was the inclusion of Faith, Hope and Charity [the three theological virtues] which are not usual in tarot decks. I remember holding the Hope card in my hand, depicting a praying woman kneeling on, or triumphing over, a male figure, who represents the vice despair. With crowned head and eyes focused on a source of light above, she holds fast to an anchor—the crucial part of a ship that secures it in port and can be dropped during a storm to prevent it from being blown off course. The anchor is a common medieval symbol of hope, as hope itself is an anchor for the soul, holding it firm and secure.

The tale of how I came to learn who Bembo was is a long one, and involved many trips to untouristed parts of Italy. Comically, my companion was often my mother. Driving a little rental car and often getting lost, we visited portraits in Cremona and frescoes in Monticelli d’Ongina. The essence of what we learned is this: Bembo was a simple medieval painter—a modest, all-purpose working artist with an artisanal team—who did not labor on behalf of magic or miracles. Still, every tarot card I touched on quiet afternoons in college told a story. One mystical lesson I learned from the early tarocchi remains my credo: Being a steadily working artist is a magical card we get to play. Art is the magic we have. That is an anchor, too.