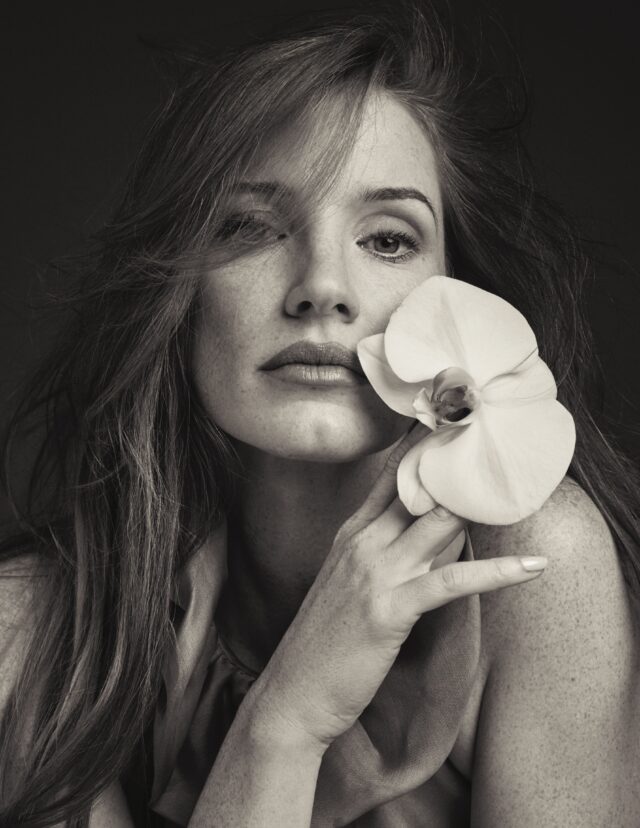 Cristina Cuomo: I’m just in love with this movie—you brilliantly portray Tammy Faye Bakker. Even your singing voice was so impressive. What attracted you to the part of Tammy Faye?

Jessica Chastain: When I watched the documentary (The Eyes of Tammy Faye) and I saw the interview with (gay Christian minister and HIV/AIDS patient) Steve Pieters I was just blown away by her, because it was a time when no one was talking about AIDS—the president of the United States wouldn’t even talk about it. So, for me, she basically says we as Christians, we’re the salt of the earth. We’re supposed to love everyone. We need to put our arms around them and tell them that we care. It was really a time when people who were suffering with this disease—and everyone was afraid to be around it—they were forced to use plastic cups and plates and not be touched. To have this woman who was such a powerful figure in the Christian community remind her followers what love is about—it’s about loving everyone and not judging—I was so moved by it.

CC: What did you identify with in her?

JC: I identify with that sense that every single person is deserving of love, even if someone has different points of view than I do. It doesn’t matter where they come from in the world. I believe that every human being is deserving of love, and that is the only thing that can cure someone in terms of something dark that might be in their lives. I do believe that I connect with her philosophy on that.

CC: Was there any part of her life that resonated with you?

JC: Well, we’re very different in that she’s someone who’s really—she was someone who’s really out there and she had the fearlessness of a drag queen, which is probably why the gay community wrapped their arms around her. She really just put herself out there and she knew people were going to laugh, but she didn’t let that stop her. I’m more shy. I’m more reserved. Playing this part was really scary for me. Before I did the very first take on the very first day, my whole body started shaking. That’s never happened to me on set. My hands were shaking. I could hardly speak. It was pretty intense. I thought, “Oh gosh, I’m really putting myself out there, and I could fail and people could make fun of me.” I’m taking a huge risk in playing this part. It’s so different from anything I’ve done. I used that fear to help me, but I think the things that I relate most to are her philosophies on humanity.

CC: She had a great voice and you really mimicked it and it was really wonderful to listen to. Sound is such a big part of this movie. How did you prepare to play a singer?

JC: Oh, that was so stressful. I worked on the music for a long time, and then we recorded it with Dave Cobb, who’s the best. He’s so good. And I drank a lot of whiskeys. I’m not going to lie, because I was so shy and so out of my comfort zone. So, Throat Coat [herbal tea] in whiskey was my drink of choice, and I had it the first day of recording—I think we recorded for two or three days. And then when I came back, Dave said to me, “You know what? I want to take this one song up two keys.” I was like, “No, this is too high. Please.” I trusted him, and did it, and then he decided to go back and pick everything up, way out of my comfort zone. And the reasoning he had for it, which was so smart, is that she was always beyond a 10. She was at a 12. She was always pushing louder and he said the songs were sitting too comfortably in me, so he really needed to push me beyond what I thought was possible and that’s how he got the “Tammy Faye tones.”

CC: How was it working with Andrew Garfield?

JC: Oh, I love Andrew. He and I are very similar in the way that we work. We’re very research-oriented. I bought the rights to The Eyes of Tammy Faye almost 10 years ago, so I had been gathering briefs and I had been reading about her for almost a decade. But when we started prepping together, we would send videos back and forth. It was such a long runway before taking off, before all those takes. So we would send videos back and forth and watch Jim and Tammy, and then every Sunday morning to start the week, we’d pick up coffees and we would drive to Heritage USA because we filmed in Charlotte, North Carolina, which is where all of this happened. Every Sunday morning we would go to the service there and we actually met with people who knew Tammy and Jim, and we would walk around. It was such an amazing way of starting the week, because we worked very closely together.

CC: How did you come about picking the great comedian-director Michael Showalter to direct?

JC: I loved Michael Showalter’s work in The Big Sick. He has a quality that I thought was really similar to Tammy, where he’s kind of larger than life. He’s so funny, and she was so kind of absurd, but really she had a lot of depth. And that’s all Michael. It just fit together really nicely.

CC: This is a big labor of love for you. Was it challenging producing and staying in character as the lead actress simultaneously?

JC: It was challenging. I love all the creative conversations, and I kind of felt like being involved with producing was important in terms of the story that I wanted to tell, because I knew so much of Tammy Faye Bakker’s life through the salacious gossip I grew up with. Through all of my research I really wanted to make sure we weren’t making a film that played into anything too tabloid-y and cheap. I didn’t want to further victimize Jessica Hahn. I’d read some interviews where she had just said I want to be left alone and I want people to stop talking about it. So that really hit me like, OK, I don’t want to put out anything negative. If I’m telling the story about Tammy Faye Bakker, how do we do so in a responsible way that also highlights something that most people don’t know about her?

CC: Well you certainly did! How did you get those great cheeks and jawline to look so wonderfully authentic?

JC: Oh, that is the incredible hair and makeup team, Justin, Linda and Stephanie. It was hours and hours and hours and hours and so many makeup tests. I mean it sounds like it’s easy, because you basically just have to sit there. It’s definitely not easy. My first day of shooting I was picked up at 3:30 in the morning. People are just gluing stuff to you and I realized I just had to make it a meditation, because otherwise you start to get claustrophobic and start to panic. I also watched the documentary almost every day.

CC: Out of all the roles you’ve played throughout your prolific career, what character do you identify the most with?

JC: Oh gosh. I wouldn’t say one character is meaty and one isn’t, because I connect to all of them. The one that for me felt the most life-changing and the most directed to the person that I want to be is the character I played in The Tree of Life, because she was the epitome of grace and of love. Every morning I would meditate, and open my heart space, and do all of these things, and it felt really, really good to cultivate that aspect of myself. 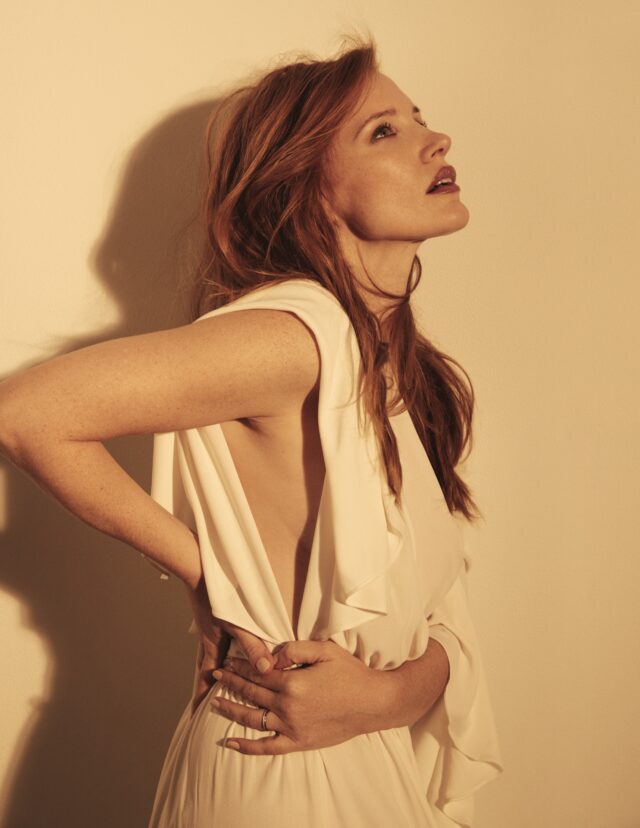 CC: Do you get more satisfaction playing a fictionalized character like Murph or Ava, or a real-life person like Maya, Tammy Faye, Molly Bloom or your upcoming Tammy Wynette?

JC: It’s much easier playing a fictionalized character because you can do whatever you want. Any impulse you have that comes from the script, you just create it. Playing someone like Tammy Faye, that’s the hardest thing I’ve ever done because it’s pushed me so far out of my comfort zone in terms of accent—the Minnesota accent—and her voice is so much higher than mine, so then it’s the pitch. Then she is constantly embarrassing herself all the time. There was so much about her and the way she laughed and how she sang. So much about her that I knew people can just Google and find. Tammy Faye’s interview with Steve Pieters is on YouTube. So, I needed to make sure that when people start Googling Tammy Faye, it’s not far off. I need to be able to play her and honor who she was and even her hand movements and all of that stuff, but then also not make it a caricature. I needed to fill it with emotion. So to me that’s much harder when someone can just do a quick Google and then they see, Oh, the exact same thing that’s in our movie, here’s the real Tammy Faye doing that scene. That’s much harder. 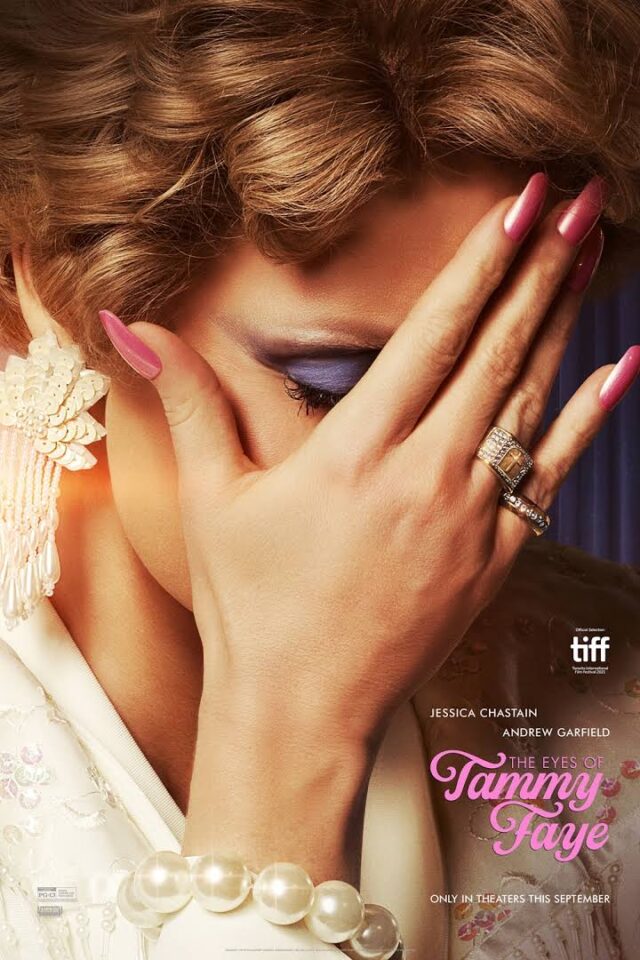 JC: Yeah, exactly. It’s scarier. That’s why my whole body was shaking, but sometimes when something is really, really scary and you do it anyway, you just feel like, Oh, I can do anything.

JC: I’m sure even like exercising. Like before you exercise, you don’t really want to do it, and then you’ve done it, and feel invincible. It’s kind of that thing. It’s taking your vitamins.

CC: So, what are you happiest doing in the summertime?

JC: We have a house in the country, and I love going there with my family and friends. And I love cooking, I love going to farmers markets. We have a little firepit. I love sitting outside by the fire and roasting marshmallows and making s’mores. I also have a little outdoor movie screen that I can set up and can watch movies outside. I love that aspect of outdoor living. Most of the time I’m definitely a city girl, so to just kind of be back in nature and smell grass and flowers, that’s what I love the most.

CC: What is your wellness philosophy and your regimen for beauty and fitness?

JC: Well, I’m vegan and I’ve been vegan for a very long time, so I think for me it’s all about food. So much is about what you eat. I know a lot of people who really indulge and then do a ton of working out. I just love fruits and veggies. Watermelon is the most delicious, sugary dessert I could have. I love juicing and doing yoga. Also, I love taking baths. Having a hot bath every night and a good night of sleep is my joy.