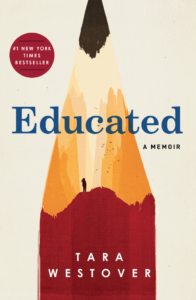 STEPHANIE RUHLE: You tell an extraordinary story in Educated. Many of us, as we read it, were calling our girlfriends, going, “This book!” Did you have any idea that your story would resonate so strongly?

TARA WESTOVER: When I was writing my book, I remember feeling: “This will really resonate with all the little girls who aren’t going to school and who work in junkyards.” I thought it would be great for those five people, and everyone else was going to think it was weird. I was very surprised when that didn’t turn out to be true. I like it when I do an event and someone comes up to me and says, “You know, I was never allowed to go to school, and my story is like yours,” but I really like it when someone says, “I was raised on the Upper East Side and your story really resonated with me.” I don’t fully understand it, but I’m glad. A lot of people have difficult family situations that they have to resolve in adulthood—I think that’s a common thing.

SR: How would you describe your childhood?

TW: It was polarized. I grew up on a beautiful mountain. I had a mother who was an herbalist, and to me that seemed like magic. We had a junkyard, which when I was very young was wonderful—some kids had a jungle gym, and we had a junkyard, which was even better. And we had horses. But then there were some darker elements, too. I had an older brother who had a serious problem with violence, and my dad, who was quite paranoid, has a lot of extreme beliefs. So I would say it was a childhood of extremes.

SR: Did you understand what normal life was? You were isolated with your family. You didn’t go to school, but you did know that the rest of us did?

TW: Yeah, I saw all the other kids in my town get on the school bus and get dropped off. I was aware that they were living a life that was very different.

SR: Were you being homeschooled?

TW: I thought I was, but I didn’t really know what went on in school. I was taught to read. I was taught to do basic math. I could cook, which I guess the math was for, mostly. But I wasn’t taught that you needed a lot more than that.

SR: For you, not receiving any medical care, when you were in any type of situations where you needed help, did you know that you needed a doctor?

TW: No, I experienced the not going to school, not going to the doctor, all of that, not as us being weird and extreme, but us living the right way and everybody else living the wrong way.

SR: How did you make the decision to pursue an education?

TW: I didn’t want to work in my dad’s junkyard anymore. When I arrived at Brigham Young University for my undergraduate studies, I just knew it would be different from what I was doing.

SR: How painful was that for your family, for you to make a decision to abandon their way of life?

TW: I imagine it was really difficult. The love there is real. That’s the thing we sometimes leave out of descriptions of abuse. A lot of times people who have these kind of thoughts and behaviors also have a whole set of wonderful attributes, but something is wrong, whether because of something that happened to them, a mental illness or who knows what. People are very complicated; they can genuinely love you, and still be very damaging.

SR: You call this journey your self-intervention. Can you tell us a little bit more about how it works? Because many people, to varying degrees, need one.

TW: It’s an incredibly complicated process, and I don’t think it’s any one thing. It’s a step forward, and it’s four steps back, and four steps forward. That’s how I experienced it. If I could have made it shorter, I would have.

This interview took place at The New York Society for the Prevention of Cruelty to Children’s 2019 Spring Luncheon. nyspcc.org