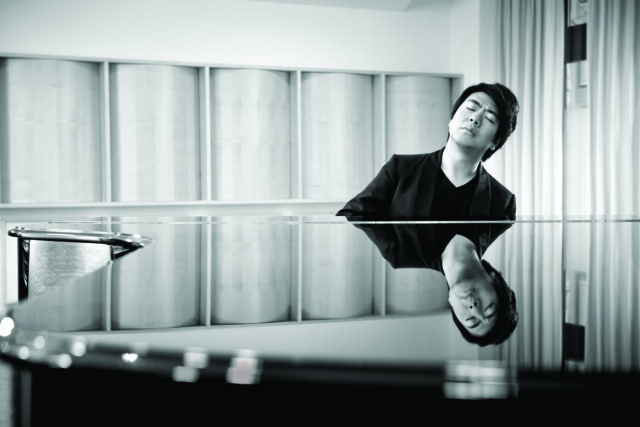 RAY ROGERS: You performed the Goldberg Variations at St. Thomas Church in Leipzig, Germany, where Johann Sebastian Bach used to perform and is laid to rest. What did it mean to bring that piece to life in that place?

LANG LANG: St. Thomas Church is really unbelievable. It’s a place that I feel Bach is still there. To play with the same kind of acoustics like many years ago was the sort of experience I never thought I would have. Especially when I was playing the Variation 30th, I feel he is always next to me. It was a bit like Isaac Stern talking about Carnegie Hall. In one of the documentaries he said, “Every great musician is hearing you playing.” So I have a similar feeling about the situation.

RR: I can only imagine the amount of mental focus and clarity it takes to perform something like this. How do you stay in the zone?

LL: It’s a very challenging, long piece. Almost 90 minutes. So the strategy is to play with less emotion in the beginning and to gradually go deeper and deeper and to play with more ornamentations and play more with colors. So I’d say the first 10 variations take off, not flying too high. Then gradually, from the middle one is going up. Then comes the most important, which is variation 25, which is the adagio. This is the most difficult. It’s the darkest color of the piece. After that it becomes easier, mentally. Though technically it’s getting much more difficult, but mentally it becomes much easier after variation 25. The last area is the memory of the piece. When you’re 90 years old, remembering what you did when you were young.

RR: What went into being able to roll with all those emotions and sustain the mental focus for all that time?

LL: This piece is written for someone who couldn’t sleep. Bach was trying to make something very long and complex and chill and pure. The reason behind the name Goldberg is that [legend has it] he was the best keyboard student. It was not actually written for Goldberg—it was written forGoldberg to play for one of his very important friends [Count Hermann Karl von Keyserlingk, Russian ambassador to the court at Dresden] who had helped Bach very much. I would say this piece is very successful for wellness, in a way. It’s not a very quiet piece. It has a lot of emotions behind it. I would say this piece will give you a good sleep, but very dramatic dreams. I actually had a few experiences of listening to this piece and sleeping at the same time. It’s a great piece to relax your spiritual self.

RR: Did it give you any dreams?

LL: Yes. In the beginning it’s quite dramatic, with lots of chromatic changes. So it’s almost like mathematics. You dream of stairs, you dream of certain characters. Because each variation means different moods. When you analyze the piece you realize how much of a genius Bach was. It’s unbelievable, the way he envisioned the piece. Just incredible.

RR: And what do you listen to when you get ready to sleep?

LL: Adagios of symphonies, slow movements, of Brahms symphonies, Mahler symphonies. I also listen to pieces like Verdi’s Requiem, or some opera by Wagner. Or something completely different. Mostly I would say I feel like hearing symphonic and jazz.

RR: Music means a lot of things to different people: Some find release, others find it a meditation. What are your thoughts about music as it relates to wellness?

LL: I’m always trying to have a good massage. I believe we will not do well in our professions if we are not completely mentally balanced or physically balanced. As musicians, we’re very sensitive. When you’re feeling 1 percent uncomfortable, that will give you less confidence to play. I’m someone who’s very focused to have a healthy condition, mentally and physically as much as possible.

RR: You had a pretty serious injury just a few years ago with tendinitis in your left arm. Did the recovery inspire you to take on such an ambitious piece of work now?

LL: Yeah. That was almost two years ago. I’m very grateful that I had one year and three months of not playing concerts. I had the best recovery you could imagine. Also mentally, I felt I needed some time to rest. Because of many years of heavy traveling and heavy playing, it was time to take a little break. I came back to play when I was more mature and with much more substance. That was a good break for me. I really reflected.

RR: We are in a period when audiences aren’t able to go see live music right now. Do you miss performing in front of a live audience?

LL: Yes. I totally miss that. I feel so sad we are experiencing this. I really hope this nightmare will end soon and we can go back to performing. They postponed most of our concerts this year and I’m very fortunate that before this coronavirus I already started to focus on the Goldberg Variations. So in a way thank God I have this recording and I’m able to perform and I was able to study it before the disaster came in. If the coronavirus took place one month earlier, I would not have completed my study of the piece.

RR: Did recording this change you as a person, as a performer?

LL: Yes. It took me so many years of study and strategizing how to work as a mature artist. You’ll never find a more complex piece than the Goldberg Variations. I never played a piece deeper beyond Goldberg Variations—the space, the dimension and depth of the musical lines and musical phrases and harmonies, the chords.

RR: I saw a documentary where you said at the end of a concert you have to feel you’re part of this piece, you’re one of the owners of this piece. What did you mean?

LL: I never performed this piece in a big public way before. I did play a few times for a very small audience, friends of mine. But the real experience is much more risky than practice. Also, I cannot drink too much water before the concert because it’s really hard to not go to the bathroom. It’s a very long concert—an hour and 30 minutes. The first performance, I was so nervous. Then gradually I feel so great because this piece really takes me to another world and another dimensional music planet—another milestone, or another mountain, another zone. I never find this type of enjoyment by playing other pieces.

RR: You’re one of the most streamed classical musicians—your last album was streamed something like 165 million times. What music do you stream when you want to hear music?

Lang Lang’s Goldberg Variations (Deutsche Grammophon) is due out on September 4.