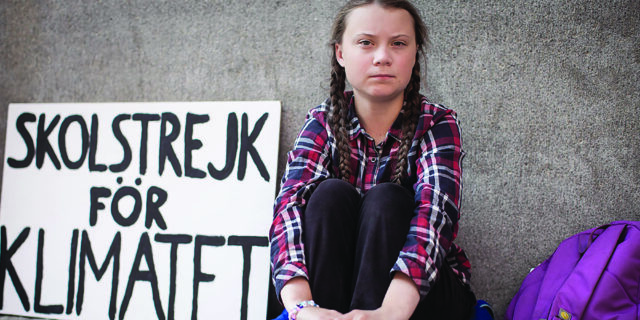 While most of the truths exposed by Greta Thunberg’s groundbreaking activism have been concerned with climate change, another reality comes across in the new documentary I Am Greta. By her example, the Swedish teenager reminds us that regardless of our political power, each of us is capable of bringing about radical change.

The film, directed by Nathan Grossman, begins with footage of Thunberg, then 16, as she sails across the Atlantic Ocean to address the U.N. in New York. (Thunberg doesn’t fly, and is vegan for the same reason: carbon emissions.)

The fact that it took less than a year for her to transform from being a lone protester to de facto leader of a global youth movement is also a reminder that while the glaciers melt, social change need not occur at a glacial pace.

The film follows Thunberg as the pigtailed teen meets with heads of state, inspires hundreds of thousands of young people to protest in the streets, and ultimately embarks on that now famous boat ride to New York. The film is open about her Asperger’s and doesn’t shy away from moments showing her as a complex and flawed human, giving us a glimpse of the human being behind the media spectacle.

“It was important for me to show the person, 360 degrees,” Grossman says. “It’s easy today with social media to just show one side of yourself. What’s so beautiful with Greta is she is open about her diagnosis.”

Asperger’s may have contributed to her fixation with facts and figures about climate change, which Grossman believes might be one secret of her success. “We’ve been talking about it for 30 years, and we may have missed out on some core facts that are very alarming. She has been able to identify facts that are maybe buried in U.N. reports.

”Those who know her only from media accounts may likely have only seen her sternly lecturing world leaders. (“We have not taken to the streets for you to take selfies with us and tell us that you really admire what we do,” she said, while addressing the Houses of Parliament in London in April 2019.) I Am Greta also reveals a tender, innocent side of this preternaturally fierce teen. We see her nuzzling her horse and FaceTiming with her dogs; the depth of her love for animals is palpable. The tone of the film has a raw emotional intimacy that never devolves into stridency about the climate change movement itself. Instead, we are left with a quiet, respectful sense of the pain and hope that drive this extraordinary human being.

Skeptics may argue that despite the attention Thunberg has focused on the issue, the world is no closer to solving the problem of climate change, but Grossman disagrees: “I don’t think she is trying to change the atmospheric content of carbon dioxide. That’s something the world needs to do together. Greta hopes to ring the alarm and get people to focus on the issue, and she has done that to a bigger degree than anyone else has for years.”

I Am Greta is available for viewing in the Virtual Cinema of the Hamptons International Film Festival, from October 9 at 10AM through October 14.