As the Hamptons moved forward, potato fields and seiners vestiges of a bygone era, Montauk was a last holdout for fishing boats, a decidedly un-Hampton. Today a resort and a desired location for the trendy, the final stop on the Long Island Railroad hasn’t lost its allure of privacy as it became a draw for the young wanting to party and surf. As legend has it, Long Island’s East End was a realization of high hopes: An early developer, Carl Fisher, had a vision of Montauk as the “Miami Beach of the North.” 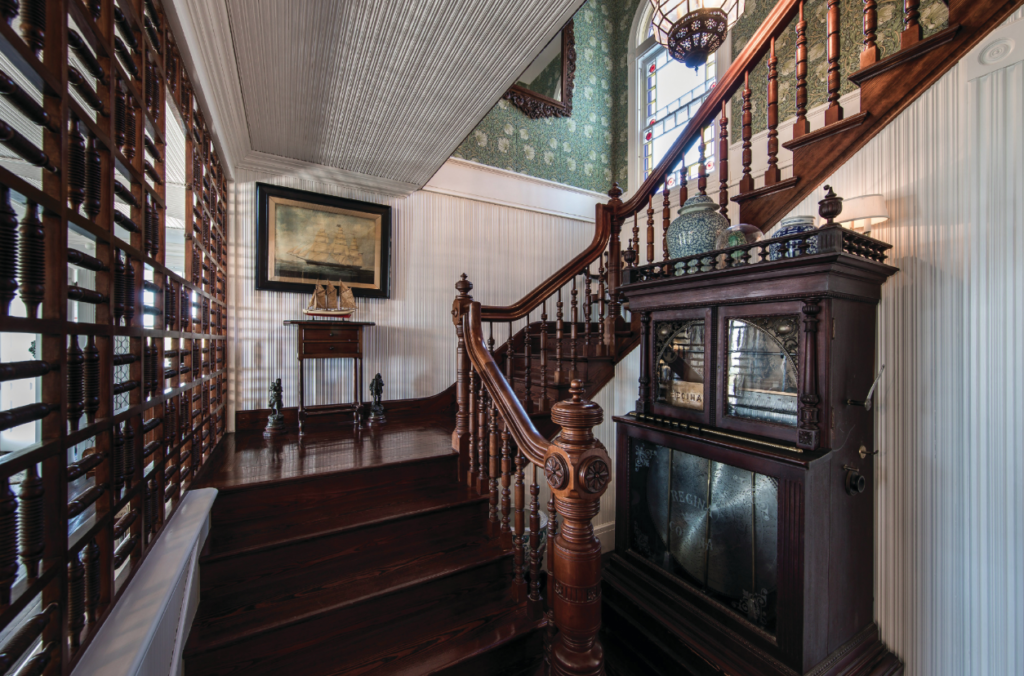 Even earlier—in the 1880s—Arthur Benson hired architects McKim, Mead & White to build the Seven Sister houses, with a site plan by landscape architect Frederick Law Olmsted, who also designed Prospect Park and Central Park. Collaborating with Charles Follen McKim and William Rutherford Mead, the legendary Stanford White contributed to the partnership his eye for refined details and dazzling arrangements of texture, color and objects. The houses, sometimes called the Montauk Association, were distinguished by their unique sawtooth shingle design, and their names. 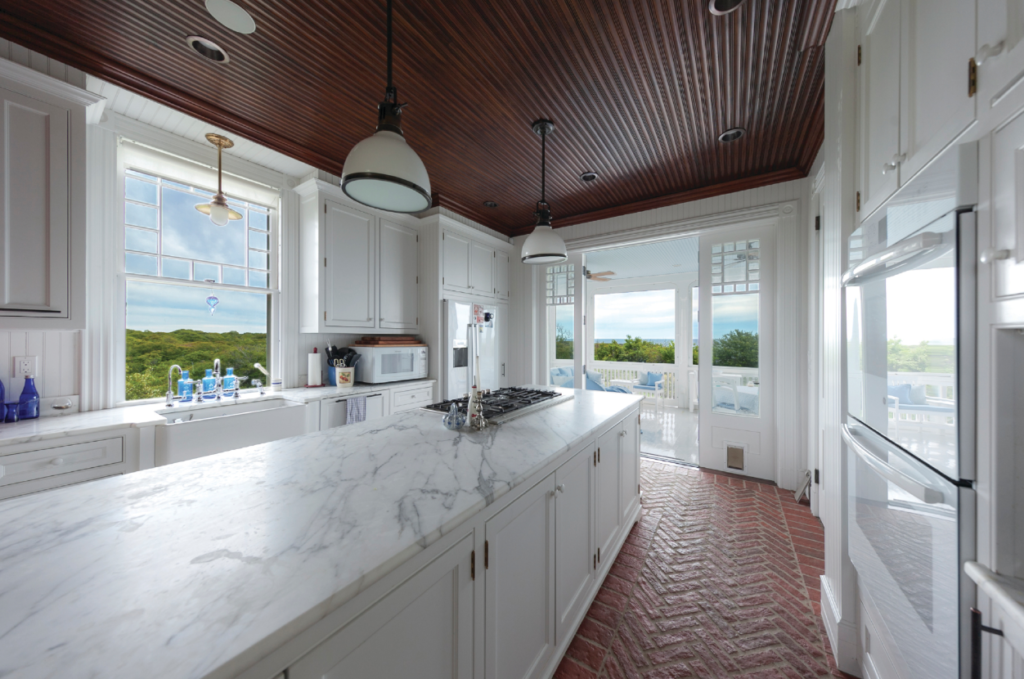 Originally built for businessman Alexander E. Orr, Tick Hall got its moniker after it became home to lawyer and civic leader Harrison Tweed in 1924. Six friends chipped in $2,000 each to summer there; the men were called “Ticks,” their wives “Tickesses,” and children “Tickettes.” Hoyt Cottage was once a restaurant, before becoming a private home to painter/filmmaker Julian Schnabel. Fashion photographer Bruce Weber and Sports Illustrated photographer Walter Iooss now also live in the cluster. Kitchens were minimal as the families met at a centrally located clubhouse for meals; more recent owners had to add indoor plumbing and facilities for cooking and dining.

Talk show impresario Dick Cavett has resided in Tick Hall since 1966, restoring his historic home with its waterfront views to exacting original detail shingle by shingle after a fire in 1997—even down to the fireplace tiles from Shropshire, England, and including charming imperfections such as a creak in the stairs and slight sag in the porch.

“It’s the only one of the Seven Sisters with oceanfront because in the 1920s, then-owner Harrison Tweed bought all the available land down to the ocean and some behind the house,” said Cavett, interviewed on the occasion of his putting the property up for sale for $62 million, the first time in its 135-year history it’s been offered for sale on the open market. “His friends thought he was mad to squander five dollars an acre, saying, ‘Who will ever come out this far on Long Island to this wild and inconvenient place to bother you?’” True then, Tweed’s smart move became the envy of the less visionary. The property is now nearly 20 acres, surrounded by conserved land. “When it was built, it was called ‘a summer cottage.’ But it struck me as majestic, romantic, a storybook house by the sea. It made me gasp,” Cavett recalled.

Surely his guests over the years have felt the same: among them, Montauk neighbors Andy Warhol, Edward Albee and Percy Heath, and others from the worlds of theater and culture, such as Tennessee Williams, Mick and Bianca Jagger, Mary Tyler Moore, Dustin Hoffman, Lauren Bacall, Alec Baldwin, Javier Bardem, Christine Baranski, Robert Redford and Muhammad Ali. When Woody Allen, an unlikely admirer of such beauty in nature, visited, he said, “Cavett, this is a storybook setting.”

One arrives at this exclusive, remote and stately house over a long gravel road past a trailer park (itself prime beachfront real estate). On a recent Sunday guests journeyed along Ditch Plains, taking the dirt path, for a celebration of Guild Hall’s new Guitar Masters series. Offered a house tour, guests could not resist the charm of Victorian-era rooms looking to sea vistas, Montauk’s historic lighthouse, and an expanse of lush green. Eva Iooss especially noted the attic alcoves, featuring small beds and a miniature seating area looking out at the sun’s silvery flecks on the water. In this idyllic spot for children, Cavett has recalled unfolding some cardboard pieces, and finding Diana Barrymore’s dollhouse.

Guitarist G. E. Smith said he could while away the day on the wraparound porch, a listening perch for some. Others lazed on a grassy slope to hear Eric Clapton side man Doyle Bramhall II cover the Beatles’ “Two of Us,” and Muddy Waters; with Adam Minkoff, he performed his own “Mama Can’t Help You.” This was a picture of paradise. 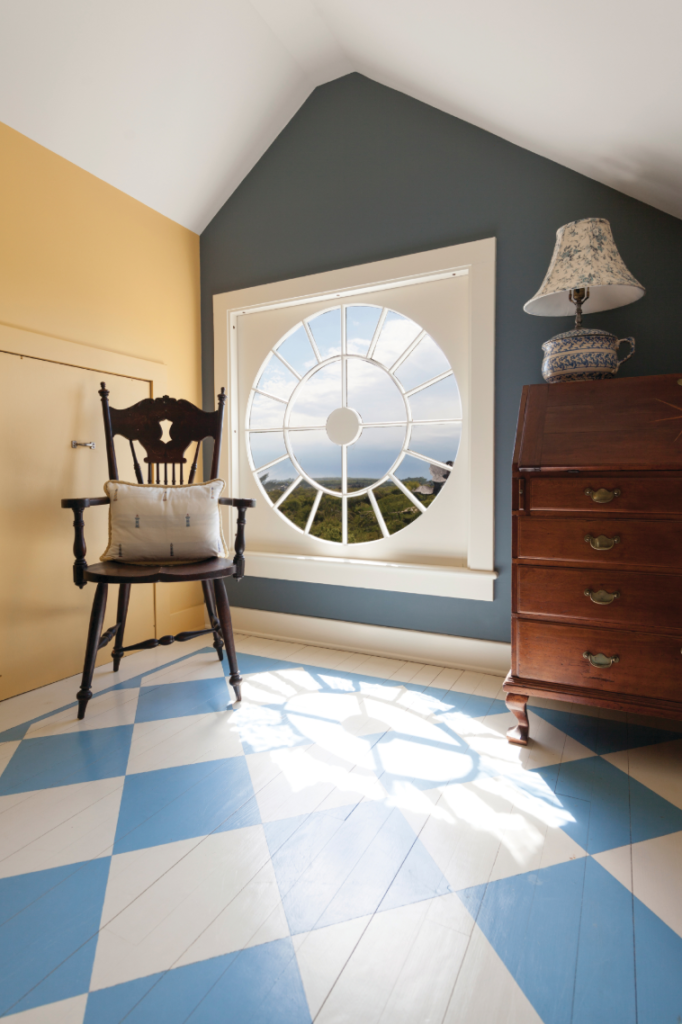