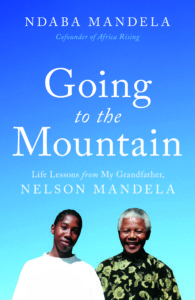 Arriving home at the end of a trip abroad, the Old Man always came to my room, even if it was a little past my strict 10 o’clock curfew. I was always glad to hear his footsteps in the hallway. I didn’t run to him and throw my arms around him. The thought never even crossed my mind. We greeted each other with a handshake, dignified and manly. He was very weary most evenings, so I didn’t try to engage him in a long conversation. I knew he’d be up early, and if I got up early too, we would work out together.

Madiba was religious about his morning walk, and the rest of his daily exercise routine was usually some combination of skipping rope, press-ups and weights. He introduced me to the medicine ball and took me through his favorite moves with it. “Lunge like so. Good. And now press it up. Up, up! Straight up! That’s it. Very good. To the side now. Keep it up here, Ndaba, at the level of your shoulder.” Looking back, I cherish those early morning hours with my granddad, though I had a hard time keeping up with him. He was almost 80 years old, but he’d always been fastidious about taking care of himself and staying healthy, even while he was in prison.

“On the Island,” he said, “when there was talk about a hunger strike, I said, ‘Why should we, who are already fighting for our lives, punish ourselves with deprivation?’ No, no. We had to eat whatever meat and vegetables were available to us. We had to take care of ourselves, keep ourselves strong enough to resist. Better to punish them with slow-downs and refusing to do the work.”

The bleakness of his life in prison was a stark contrast to the beauty of his life in Qunu. As we lunged and lifted and twisted with our medicine balls, he told me about how he used to climb up on the back of an elderly bull and ride around the fields near his mother’s hut.

“We’ll go there someday, Ndaba. I’ll show you where your Old Man comes from,” he said. “You’d like to go there, wouldn’t you?”

“Yes, Granddad.” I was breathing hard, thinking about what it would be like to ride on a bull.

He was a mighty cedar tree in my mind. My invincible granddad. The idea that I would never see him again—that was unthinkable.  But the next day, Auntie Maki called again. She spoke with Kweku first. He said nothing. Just handed the phone to me. And I said nothing. Just listened.

The words hit the back of my knees like an axe. I had to tell myself to blink. To breathe. Strength and stoicism are two qualities that were carved into my character from the time I was a little boy. I knew, because I’d already lost both my parents, that this initial throat punch would pass, and then a wave of grief would hit me, and it would last for a long time. I cried a lot that day. I have never cried like that before or since. My brother Kweku held me, and after 10 minutes or so, I went in the bathroom to dip cold water on my face. We made a few calls, arranged flights, and made the two-hour drive back to our hotel. The car was silent.

I’m thinking of going to the Eastern Cape to spend the rest of my days. Are you going to come with me? Yes, of course.

I went with him to the Eastern Cape. My family and I. We drove for what seemed like an eternity, through rolling hills and across expansive savannahs to the place that was once called the Transkei. The colonial government had set aside this “homeland” (which could better be described as “reservation,” but only because it was too unwieldy to be called “concentration camp”) where they could warehouse black people while the government debased them, robbed them, tore apart their families, and cut them off from the rest of the world.

And then Nelson Mandela happened.

“There is no beast that does not roar in its own den.”

You alone reign over your own spirit. No weight, no spear, no oppressor can take that self-sovereignty from you. While my grandfather was at Robben Island, he wrote to the Commissioner of Prisons, “I have never regarded any man as my superior either in my life outside or inside prison.”

Your resolve—your truth—that is the voice that roars within you. My grandfather taught me to listen to that voice within myself.