What most people don’t know about CBD is that the delivery method affects its potential benefits. Think about it this way: When you ingest a CBD product (drink, capsule, gummy) a majority of the CBD gets lost during the digestive process. Enter Favour, a chewing gum powered by higher bioavailability, the degree to which a substance gets absorbed into the body. Through chewing gum, an easy and reliable solution for CBD use, the beneficial compound gets absorbed into the mucosa in the mouth, bypassing the digestive system to allow for a higher bioavailability of CBD to be absorbed into the bloodstream, up to five times faster than pills or capsules. With 10mg of CBD in each piece, Favour makes it easy to keep track of dosing.

My story begins in the middle of my senior year of high school. I had been a competitive runner for years, and had just been recruited to Columbia University for cross-country. Early in my freshman year, I began to realize that the way that I had been treating my body was not sustainable. I wasn’t fueling myself with the right foods, and my mental health was at risk. I hadn’t realized up until that point that being in a highly competitive environment (both athletically and academically) for so many years had taken a toll on my mental and physical health. So, I made a tough decision to quit the team to focus on myself.

What I thought would have been the best decision moving forward led me into a cycle of deep depression. I became fearful of the gym, put on weight, and lost my confidence—a complete 180 from where I had been the previous year. My friends encouraged me to try therapy, and it didn’t help. I didn’t want to work out. About a year-and-a-half ago, someone suggested that I try CBD. As someone who has a pill aversion, who doesn’t like relying on taking something to make me feel better (exercise had always been my remedy), I was hesitant. But I threw in the towel and started experimenting with the different types of CBD products on the market—capsules, gummies, tinctures.

At the same time, Favour co-founders Gigi Grimstad (my mom) and Margaret Luce had started experimenting with CBD to help manage various daily disruptions that they had been experiencing as two women going through the aging process—and life. Over lunch one day, we all came together and said, “The positive benefits of CBD are so real, but there’s not one product that we can pull out of our pocket every day that we can rely on.” We created it in a form as familiar, fun and discreet as chewing gum. 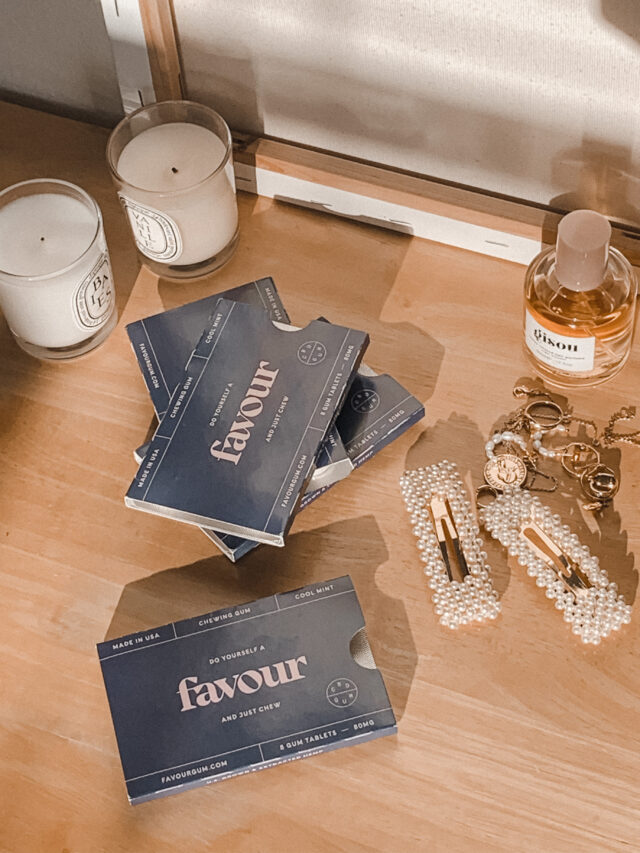 The recommended amount of CBD varies from person to person. That said, if you’re a first-time user, start low and slow. One or two pieces of Favour a day should be a good beginning. Gradually increase the dosage if you think you need more. At Favour, we stress the importance of consistency with CBD, as benefits have a greater potential to grow with daily use. Think about it: you wouldn’t eat a salad once a week to see a general shift in your health—there would need to be a daily change. CBD works the same way. It’s all about routine. favourgum.com