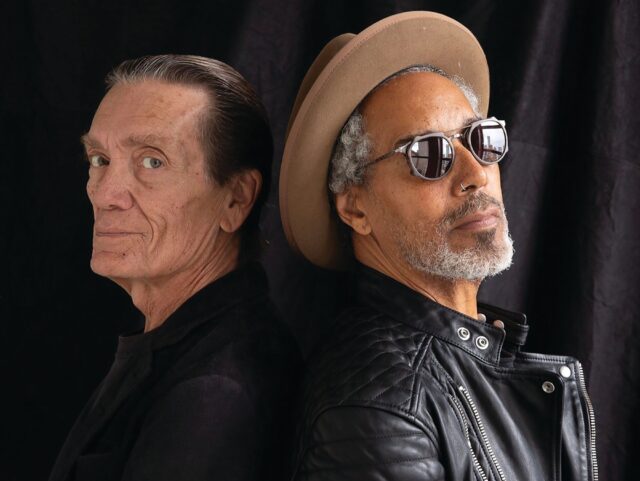 In the video for the rousing and topical new song “America,” legendary axman G.E. Smith and revered soul singer LeRoy Bell sit down to a game of chess—not in some epic battle of wits, but more in solidarity, two friends from different backgrounds enjoying each other’s company. “If you look closely, you’ll see the board starts out with black and white pieces mixed together on each side,” notes Smith, whose wife, singer-songwriter Taylor Barton, directed the visually arresting monochromatic clip.

It’s a hopeful message for a song, written by Bell, that decries the inhumane and divisive politics of the current administration: “No Dreamers anymore, democracy is out the door,” intones Bell in one lyric, soulfully singing about the plight of the “Dreamers,” immigrants brought into the US as children and granted tentative protections under former President Obama’s Deferred Action for Childhood Arrivals (DACA). “One morning when I was starting to write that song, I had a vision of the little girl who was crying as they were pulling her mom away and putting people in camps,” says Bell, a hit songwriter for the likes of Elton John and Jennifer Lopez. “And I thought, ‘What the hell is going on?’ It was like Nazi Germany or something—like, is this for real?”“

“The song really resonates right now,” concurs Smith. “I loved it as soon as I heard it, not only for the lyrical content, but it’s a good, structured song; it has that thing that great songs have where musically, it’s simple.” Recorded at Apple wild Farm, a bucolic equestrian facility in Bridgehampton with a little studio downstairs, the pair’s debut album, Stony Hill (BMG), out August 28, sounds every bit the work of polished professionals, but it’s also emotionally raw and direct.

In person, seated in the high-ceilinged den of Smith’s airy Amagansett home, the duo has an easy way with one another, even while masked and seated far apart. Both are quick to compliment each other, and in song the two balance one another brilliantly. “I’ve been looking for the right singer to go with the way I play for about 30 years,” says Smith, who has worked with everyone from Hall and Oates to David Bowie, in addition to leading the Saturday Night Live band for years. “My wife heard him on Spotify and was like, ‘G.E., listen to this—this is the guy!’”

The resulting bluesy rock ’n’ roll album, bursting with instantly hummable tunes, proves the partnership couldn’t have come at a better time. “Music has always been the great common denominator—no matter what kind of music it is or where you’re from, it just speaks to you somehow. It has that human kind of thing,” says the Seattle-based artist, nephew of acclaimed songwriter Thom Bell, who wrote the Delfonics’ enduring hit “LaLa Means I Love You.” “And I think as artists we have almost a duty to do something [about the times we’re living in]. If I’m pointing out inequalities, I also want the songs to have a unifying message of hope. The whole idea of pointing out the bad is to show that we can still somehow correct it.”

Working together on this body of work, says Smith, “made me think of the Eldridge Cleaver quote from the ’60s: ‘If you’re not part of the solution, you’re part of the problem.’ That’s the way it feels now. Maybe I’m not going to be out in the streets behind barricades, but this is what we can do: music.”