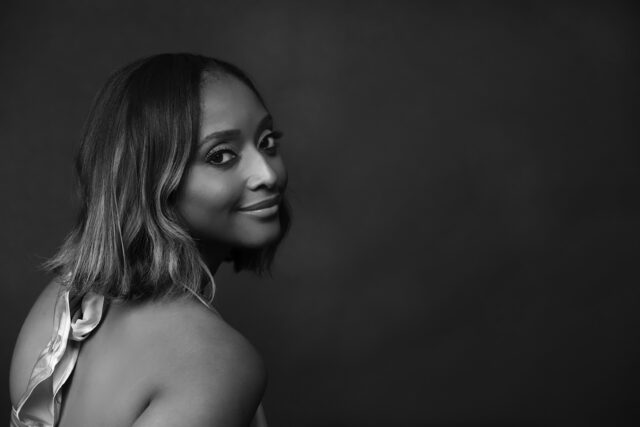 Photography and interview by Cathrine White

CATHRINE WHITE: Isha, you are an inspiration to me and so many others. What keeps you inspired these days?

ISHA SESAY: I am drawing inspiration from so many different sources right now—from the multiracial crowds that filled the streets after George Floyd’s killing, and the writings of Ta-Nehisi Coates, to the doctors and nurses who are working around the clock to help the sick during this pandemic. To be honest, having spent most of 2020 at home, anyone who is still smiling and maintaining a positive outlook on life is a source of inspiration to me!

CW: Looking back at your career in the news media, what were some of the hardest lessons you learned while working with other women, and how did it alter the way you grew as a journalist?

IS: I joined CNN International at the age of 30 and suddenly found myself in a new country, surrounded by a host of female anchors who were several years older and with lots more professional experience. One of the things that struck me was how difficult it was for many women to say “no” to unreasonable work requests, or to protect their private lives from being encroached upon, by an ever-growing workload. Ultimately, what this means is that in the news business there are far too many women who have given the best years of their lives to their jobs and missed out on opportunities to build healthy romantic relationships or have children. Though it was a lesson I took note of at the start of my CNN career, it didn’t dominate my thinking until many years later, when I was considering leaving the network. At that point, that lack of personal autonomy meant so much more to me, and definitely helped me decide to step away from the anchor desk after 13 years.

CW: Congratulations on the new venture as a goodwill ambassador for UNFPA (the United Nations Population Fund, which is concerned with sexual and reproductive health). What do you hope to bring to this new role?

IS: Thank you! It is hugely humbling to have been chosen for this role by UNFPA. This is the agency that has worked the closest with the abducted Nigerian schoolgirls, and they do the really hard work of fighting FGM, child marriage and gender-based violence, among other things. In 2019 alone, more than 760,000 survivors of gender-based violence received medical or psychological support services from UNFPA. Right now, we’re in the middle of the annual 16 Days of Activism against Gender-Based Violence and this moment is about using my platform to draw attention to the escalating cases of violence against women and girls during this pandemic. According to UNFPA, for every additional three months of the lockdown, another 15 million cases of gender-based violence are expected to occur. We must all say “enough” and urge our governments to make this issue a key part of their COVID response plans. Beyond these 16 days, I’ll be attempting to use my platform, the years of covering these issues for CNN and the knowledge I have of the impact of some these harmful practices, to galvanize public discourse and create a sense of urgency for the decision-makers who must accelerate the pace of progress in the fight against these pressing global human rights issues.

CW: Your book Beneath the Tamarind Tree, A Story of Courage, Family, and The Lost Schoolgirls of Boko Haram, released last summer, was a tremendous undertaking. Since the kidnapping in April of 2014, where do you think the story is today? By shedding light on this in your book, how do you think it has supported and educated other girls from that region?

IS: Nearly 300 schoolgirls were taken by Boko Haram in April 2014. Fifty seven of them escaped in the immediate hours that followed, but 219 disappeared into the forest. Although 107 of those girls are back, 112 still remain unaccounted for. I’m still holding out hope that once this pandemic is behind us, the Nigerian government can be encouraged to resume efforts to track down the missing girls, and do whatever is necessary to bring them home. I hope my book brought to life the resilience of African girls and how determined they are to gain an education, and with that knowledge, I hope it strengthened the resolve of donors to invest in girls’ education—not just in Nigeria, or Africa, but across the entire developing world, where too many girls are still not in school.

CW: It’s been challenging these recent months with the political climate weighing so heavily on all of us and with the uncertainty of COVID-19. How do you create space and decompress from that, as you often have to be the one reporting on it?

IS: When the pandemic first started, I was hosting two COVID-focused shows on Facebook and Instagram. I worked around the clock, and whenever I finally stopped for the day, I binge-watched and read more news for hours. During that time, decompressing was really difficult. Once we wrapped the shows at the end of June, I made the decision to be more intentional about maintaining a better balance between work and rest. So now I try to limit how much news I consume. I also decompress by watching other things that don’t weigh as heavily on the heart and mind.