CRISTINA CUOMO: Living clean is something you have done for a very long time. When did you first start on the path to wellness?

CAROLYN MURPHY: I was raised with a mom who was very health-conscious. We went to iridologists, and were cooking from the hippie cookbooks. But then there I was traveling to Paris in the early ’90s, doing [fashion] shows. Valentino and all these other designers start feeding you Champagne and ham sandwiches. I kept wondering why I wasn’t feeling well and sleeping well. That’s when I learned that maybe smoking and drinking probably weren’t the best ideas. So I went back to N.Y. and met Sally Kravich.

CC: The nutritionist. I went to her, too.

CM: I love Sally. So I met Sally in 1994 and then I started researching—this is pre-Internet—reading tons of books and finding out about biodynamic farming and genetically modified foods. It just went from there, and it became a lifestyle choice.

CC: Did you grow up on a farm?

CM: My family’s farm, yeah, in Virginia. Between there, the panhandle of Florida, and my parents’ hometown of D.C., I had the best of all worlds—beach, farm and city.

CC: Did you surf in Florida?

CM: I didn’t start surfing until I was a teenager. I was terrified of sharks, but my brother had put me on a 10-foot Hutson longboard, and I was hooked. I really started surfing in ’97, when I went to Costa Rica.

CC: You lived there for a while, just as your modeling career skyrocketed. You just disappeared to Costa Rica.

CM: I was feeling a bit empty, even with all of the success, and needed to find something else outside that felt real. I was attracted to the simplicity of life there, and needed  nature to recharge. The industry kind of glorified the move because they thought it was out of character and a contradiction to my Grace Kelly persona, but that shows how much people project, and how little they know me!

CC: How did life in Costa Rica pave the way for healthy living? What was your routine like there?

CM: My ex-husband and I would get up and surf at 5 in the morning and go fishing, or on packing trips with the horses, or up to the turtles in Ostional. Everything was based on the natural environment. The intention for the restaurant and hotel I bought was to turn it into a yoga-surf retreat and do really fresh food and everything local, but then it was just easier to have kind of a surf hut where everybody would want a cold beer and fish tacos.

CC: Which are healthy.

CM: Which are, ya know, still healthy.

CC: When was your first Vogue cover?

CM: I had a few Vogue covers at the beginning of my career—early ’90s, I did a lot of French Vogue covers, but my first American Vogue cover was ’95.

CC: Have you noticed your body’s needs change from then to now?

CM: Forty is a different story. Hormones—I think that’s the conversation that starts happening in your 40s, adrenal fatigue, cortisol and just keeping your body nourished through diet and having some help with supplements. Sleep and exercise are super important.

CC: How do you maintain balance in your life?

CM: I make a lot of lists: 7AM wake up, 7:20 meditate…my intentions are always to strike a balance, but I just kinda go with the flow now at this point. Whatever feels right. Normally I have a little battery-operated alarm. I don’t have anything electric in the room. With the recent move, I’ve had to have my cell phone to wake up until I get a little clock, a big no-no, but it’s across the room and at least it’s set to Led Zeppelin “Going to California.”

CC: Good song. Since you’re the face of beauty for a lot of women, do you feel  pressure to maintain the most natural beauty habits?

CM: I don’t feel the pressure. It just is who I am. It’s what I love talking about. I love relating to women, sharing stories and learning.

CC: Did you get a chance to meet Estée Lauder herself?

CM: Unfortunately, I didn’t meet her in person. [Her granddaughter] Aerin had prompted me to visit her at the townhouse on several occasions, but [Estée] was not well and I was living in California still. I really would’ve loved to have spent time with her. I feel blessed to have been her last choice as a spokesmodel, along with Aerin. And her legacy—to continue that is a true honor. 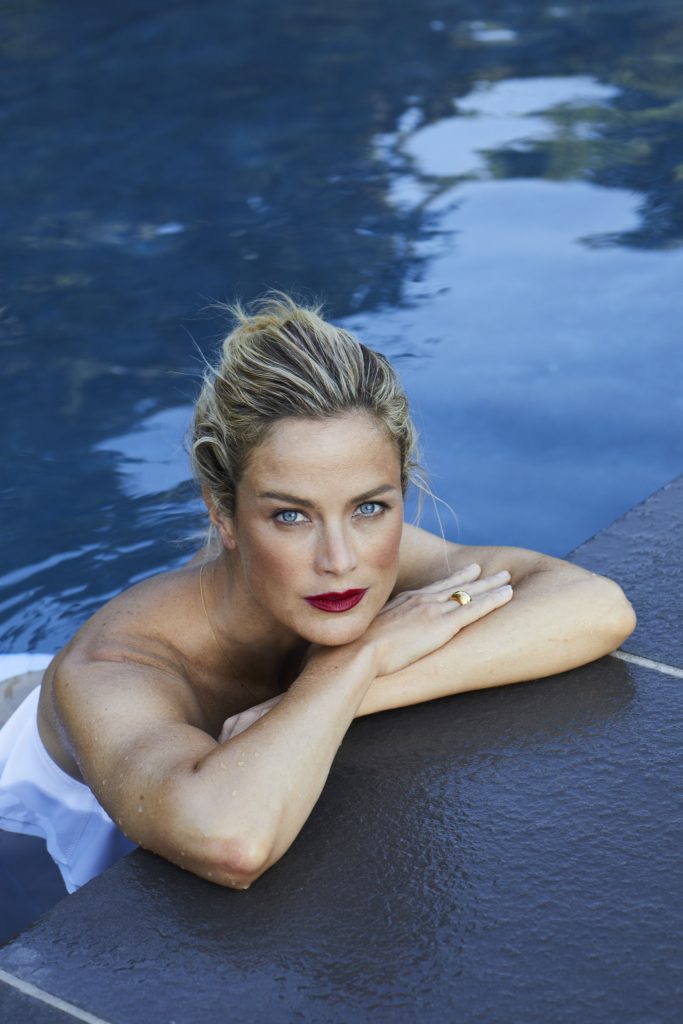 CC: What is the best advice you were ever given?

CM: It’s from my nana: “Beauty is as beauty does.”

CC: How has technology changed the way you live?

CM: That’s a constant battle, because I don’t want to give in entirely to it, but on a positive note, I’m in touch with a lot more people and my calendar is organized. However, I find myself going down the rabbit hole of Instagram when I should be reading, painting or doing something creative. I go through phases and tell people “I’m consistent at being inconsistent” with emails or texts.

CC: I hear you. I just watched my daughter and her friend furiously texting.

CC: I’m going to do that! I noticed that you’re really good about getting to bed early no matter the activity. Where does that discipline come from?

CM: My father, because he is military, so he likes to be in bed early. Early to bed, early to rise. He’s the most consistent person I know. The coffee pot is on at 5AM. You just get to enjoy so much more of the day, but I need at least eight hours of sleep.

CC: What about eating habits, and how does nutrition factor in for you?

CM: Well, I mean your car’s not gonna run unless you put gasoline in it. You are what you eat.

CC: How about when you’re traveling?

CM: All those little snack packs—the bulk aisle at the health food store, LifeThyme in the city. I just stock up on nuts, dried fruit or look up local markets and health food stores. If I’m in Paris, I might give into steak-frites and a glass of wine, but for the most part, I don’t have a strict regimen. It’s just whatever feels good to the body, because I think it tells you, even if that’s a half pint of ice cream. At BuddhaBerry last night, it was like, “Make sure you get me the cookie dough. Please make sure you get me the cookie dough”—as I put down my Modelo Especial after I had three tacos from La Fondita. I don’t want to be too strict on anything, because it’s not realistic.

CC: So when you’re balancing on the side of health, what does that look like?

CM: We have a heavy plant-based diet and Dylan loves cooking. We’ve always had gardens, chickens and support local farmers wherever we live. Avocados, salmon, that’s pretty much what we eat everyday. You will love Bragg’s Amino Acids. It’s made in Santa Barbara. It’s not tainted. You can spray it, you can douse it. It’ll be your new best friend. That’s another thing you have to be careful of: where you’re getting your olive oil from.

CC: How did you find Sag Harbor?

CM: I was living in California, and looking for a rental. I was longing for that East Coast history, which I felt like I was missing on the West Coast. That was eight years ago, and I’ve tried other places. Anywhere out here is so beautiful, but there’s just something with Sag Harbor—the quaintness and the history—that resonates with me on a deeper level. And the arts, the writing and the painting. There’s just a real community.

CC: What advice would you give your younger self?

CM: It would be a very long list. Patience is the first thing that comes to mind, but I would say to love yourself more. That’s truly where, in the times of decision-making, if you’re coming from that place, you’re gonna make better decisions. I would probably tell myself to stay true to myself because I didn’t do that a lot of the times.  There were times where I couldn’t differentiate between who I was supposed to be and who I really was. Modeling is what I do, it’s not who I am, but it’s taken me over 20 years to figure that out.

CC: What are your biggest challenges as a mother?

CM: My friend Stephanie says, “I have to take care of myself first, and then my husband and my kids.” That sounds so weird to me. It sounds really foreign, but then I thought if I tried to implement that in my life, if I get up 20 or 30 minutes early and go for a run, I’ll be a much nicer person, which I didn’t do today.

CC: [Laughing] We’re going to take you to the ocean. That should help.